Methicillin-resistant Staphylococcus aureus (MRSA) have been endemic in Irish hospitals for several decades and remain a significant clinical issue. The introduction of various MRSA clones into Irish hospitals is poorly understood, with no universal MRSA patient admission screening. Routine screening of healthcare workers (HCWs) for MRSA is uncommon in most countries without a suspected epidemiological link between patient infections and HCWs. Environmental MRSA are not routinely investigated in hospitals.

Patient colonisation with MRSA predisposes to increased opportunities for infection, leading to increased antibiotic consumption, associated hospitalisation costs and mortality. It is well documented that approximately one third of healthy people are colonized nasally with S. aureus, either persistently or intermittently. The contribution of MRSA shedding by colonized HCWs and patients to transmission dynamics among HCWs, patients and the hospital environment is poorly understood.

Microbiologists at the Dublin Dental University Hospital (DDUH), the Irish National MRSA Reference Laboratory at St. James’s Hospital (SJH) Dublin, the Department of Clinical Microbiology, Royal College of Surgeons, Dublin and the Department of Clinical Microbiology, Beaumont Hospital Dublin used whole-genome sequencing to investigate transmission of MRSA among patients, HCWs and the environment in a large acute hospital over a two-year period. Numerous potential transmission events associated with the CC22-MRSA, CC45-MRSA, and CC8-MRSA clones were identified in the absence of infection outbreaks. Transmission events involving HCW-to-patient, HCW-to-HCW, patient-to-patient and environmental contamination by HCW/patient isolates were evident. The role of environmental contamination due to shedding by HCWs and/or patients in potential transmission events was shown to be a significant factor.

Commenting on the significance of the findings, Professor David Coleman from the DDUH Division of Oral Biosciences said: “this research suggests that periodic screening of both HCWs and patients in non-outbreak settings should be considered, such as where MRSA is endemic in a defined clinical setting. Furthermore, 60% of HCWs and 45% of patients colonized with MRSA exhibited oral carriage only, whereas the nose is usually considered to be the primary MRSA colonization site. These findings indicate that oral screening should be implemented as part of routine screening procedures for MRSA, which is currently not the case. Finally, conventional approaches at MRSA decolonization do not consider the oral cavity. Therefore, it is likely that MRSA colonization rates of HCWs and patients in general have been underestimated and that failure to eliminate MRSA from colonized individuals may be due to an oral reservoir of MRSA. 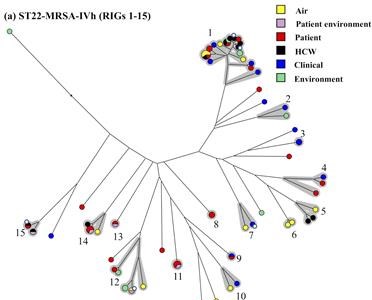