A very successful evening of lectures was organised by Dr Esther O’Regan and  Dr. Denise MacCarthy hosted by the DDUH on Wednesday 28 June 2017 in the Large Lecture Theatre, Dublin Dental University Hospital.  The evening was chaired by Professor Leo Stassen, Professor / Chair Oral and Maxillofacial Surgery, Trinity College Dublin.    The CEO of the Dublin Dental University Hospital, Mr David Barry, was in attendance to welcome this important group of colleagues to the School.  There were 70 attendees from a wide range of health care units around the city and also staff and students from Trinity College.

The first speaker was Ms Imogen Sharkey Ochoa, PhD student, TCD who spoke about “ECHO:   Epidemiology of HPV in Oral Cancer in Ireland”.  Imogen discussed the epidemiology of OP HPV disease with information on the incidence of Head & Neck cancer by site and also age standardised incidence rates of cancer of the tonsil in males and females (NCRI 2008, 2013).

She posed the question “Why the oropharynx?” and concluded that it may be related to the unique presence of transitional mucosa in the oropharynx, the tonsillar crypt and elaborated with a description of the anatomy of the tonsil as it related to the progression of the disease. She outlined a model for HPV HNC carcinogenesis as described by Woods and O’Regan et al. 2014. The aims of the ongoing ECHO study which is investigating this disease in Ireland were discussed.

Imogen concluded that it is intended that this research will contribute to future international meta-analyses, reinforcing other significant findings, or providing new findings for future consideration.  It is hoped that the research will support the justification of more widespread HPV vaccination and the development of screening tools for HPV-related HNCs.

The second speaker was Mr Paul Lennon, Otolaryngology Head Neck Surgery, SJH who introduced the topic of “Oropharyngeal Cancer and HPV: A tale of two diseases”. Paul discussed the role of HPV in cervical and Oropharyngeal Cancer and he presented a number of clinical cases to establish the differences between HPV and Non-HPV related disease.

This is a new disease and the new classification system was outlined.  The treatment of HPV related OP Cancer is evolving and has different strategies to the management of oral cancer.  It is predicted that OPC will be more common than cervical cancer by 2020 (Berman and Schiller 2017). Paul discussed the surgical challenges of working in the head and neck region. He concluded by introducing the interesting concept TORS- TransOral Robotic Surgery (Weinstein & O’Malley).

The third speaker was Dr Esther O’Regan, Histopathology SJH and DDUH who spoke about  “Histopathology and HPV testing”.  Esther commenced by stating that HPV tumour status is a strong and independent prognostic factor for survival among patients with OPSCC.  During her talk she brought us through the site, the specimen, the histology and the HPV test.  She reinforced the information of the previous speaker regarding the particular anatomy of the tonsils.  She described the challenges and the different approaches to dealing with biopsy specimen in order to locate and identify the HPV.  She commented on the evolving guidelines from various organisations regarding testing for HPV and also the management  of biopsy specimens.

The fourth speaker was Dr Cliona Grant, Medical Oncology, SJH who “The role of chemotherapy in oropharyngeal cancer”. Cliona  described the evolving knowledge about HPV and credited Harald zurHausen with the early description of the virus.  Epidemiological changes were discussed including information regarding improved survival in patients with HPV-associated oropharyngeal cancer (Ang KK et al 2010).

Under the heading of changing treatment paradigms, information was presented about the rapidly evolving role of chemotherapy in the management of OPC.  She discuss the various chemotherapeutic agents currently used including the use of immunotherapy agents. Information was presented regarding clinical trials which are ongoing in this rapidly evolving area of cancer care.

The fifth speaker was Dr Sinead Brennan, Radiation Oncology, SLH who present a wide ranging lecture on “The role of radiotherapy in H&N cancer”.  Sinead quoted recent statistics from NCRI which indicate that HPV infection causes up to 130  deaths annually in Ireland.  By 2030 OPSCC will likely constitute the majority of H&N cancers (Chaturvedi et al 2011).  She discussed the evolution from traditional methods of radiation delivery to IMRT and outlined the improvements in delivery of radiation and post radiation quality of life issues.  She stressed the importance of the multi-disciplinary team and of pre-radiation dental assessment and long-term oral care.  The role of the radiation stent was stressed with respect to sparing healthy tissues from the effects of radiation. Sinead referred to several important,  ongoing trials in her unit. She concluded by stating that the prognosis is good for many patients with HPV positive disease.  However more trials are required to establish optimal treatment protocols.

The last speaker was Dr Denise MacCarthy, Dental Oncology, DDUH who outlined the  “Impact of radiation treatment on the oral cavity”.  Denise gave clinical examples of the effects of radiation treatment on the oral cavity including dry mouth, oral infection including dental caries, soft tissue changes, limitations in mandibular movement and osteo-radionecrosis.  She presented data on the increasing numbers of patients referred for pre-radiation dental assessment between 1998 and 2017, with 55 patients in 1998-99 and 525 in 2016-17 (projected).  She stressed the need for support for this patient group to provide the service and implement adequate preventive regimes to prevent dental disease post radiation. 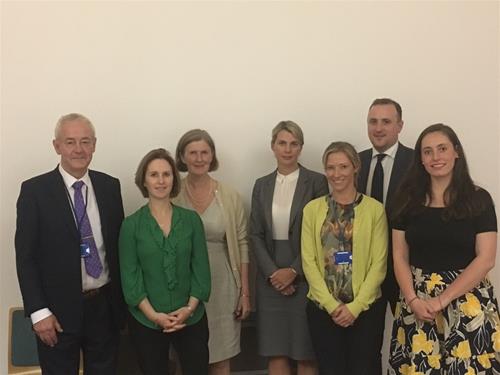